Only the masculine form is used in this text in order to make the reading easier, of course, in reality, the patients consist of women as well.

TCM refers to traditional Chinese medicine in this paper.

It is recognized as the first book to set the foundation for TCM, it is learnt from the past scholars and practitioners, it is still the basic learning in all TCM universities in China.

傷寒means harm due to Cold literary. Some scholars interpret the 寒 in a broader sense, to include all other pathogens, such as Wind, Damp, Heat etc...

The TCM diagnosis in傷寒論 is based on the six stages concept. This concept is used daily in TCM practices since 2000 years in China and elsewhere.

The prescriptions that are written in the books are a collection of 張仲景’s personal clinical experience and the experience before his time. To master how to use these prescriptions is a must if one wants to be successful in writing Chinese herbs for his patients. Some very known TCM practitioners in China used only one or two of these prescriptions with their variations to treat most patients in their daily work. There are practitioners who study the 傷寒論 for their whole life, they did not manage to try all formulae in 傷寒論.

The Tai Yang stage is the beginning stage of the external induced febrile disease. The main causes are the external Wind and Cold pathogen attacking the body surface (Biao), the fighting territory between the pathogenic Qi and the upright Qi take place at the body surface.

If the Wei Qi is weak and is not strong enough to fight off the pathogenic Qi, the Wind Cold pathogen attacks the body surface could result in the Ying Qi and Wei Qi out of balanced, thus illnesses starts at the Tai Yang stage.

Tai Yang illnesses can be divided into: Jing (channel) and Fu (organ) illnesses.

For all other cases at Tai Yang stage, based on the condition of the tongue and the pulse, the strategy should be adapted accordingly.

If the illness at Tai Yang stage is treated successfully with sweating method, then the patient returns to its health stage.

If the illness is not treated successfully at the Tai Yang stage, the illness might be progressed into other stages, such as Shao Yang, Yang Ming, or a combination of stages.

Illness at the Tai Yang stage could also turn into Yin stages, among these, Tai Yang turns into Shao Yin is the most common one, when Yang Qi in Shao Yin is weak, the pathogenic Qi in Tai Yang has more chances to go into the Shao Yin stage. It could be a combination of Tai Yang and Shao Yin illness at the same time.

As the saying goes: “Fullness at Tai Yang, deficiency at Shao Yin.”

At Yang Ming stage, the pathogenic Qi enters into the channels as well as the Fu organs. Upright Qi and pathogenic Qi are fighting fiercely with each other, inner Heat resulted from this fight, body fluid is consumed, dryness appeared due to the over consumption of body fluid.

The causes of illnesses at Yang Ming stage are:

For the beginning of Yang Ming stage, the patient could have the Biao symptoms as well.

Inside (Li), Heat and fullness are involved here.

Illnesses at the Yang Ming stage can be divided into:

Yang Ming is based on full and Heat condition, use clearing and downward purging methods.

For Yang Ming Heat: use herbs that clear heat.

Bai Hu Tang or Bai Hu Jia Ren Shen Tang. If the Heat is not treated right, the Heat may stay in the chest area, one could try to use Zhi Zi Gu Tang (梔子鼓汤)， if however the Heat injures the Lower Jiao, the pathogenic Heat may combine with the Water element, this often result in fever, thirst and desire to drink, little urine, floating pulse, one may try to use Zhu Ling Tang.

For Yang Ming full condition: use herbs that have downward purging effect.

It is to note that once the herbs have achieved the desired result, the patient should not prolong taking them in order to avoid injury to the Stomach organ and channel.

The classical theory says that the pathogenic Qi from Yang Ming will not be transmitted to other stages, but in fact, one often observe that the Biao and Li relationship with Tai Yin do exist.

As the saying goes: “Fullness at Yang Ming, deficiency at Tai Yin.”

Among the three Yang stages, Tai Yang being Biao (surface), Yang Ming being Li (inside), Shao Yang is the stage between the Biao and the Li stages.

The causes for illnesses at the Shao Yang stage are:

Intermediate Cold and Heat manifestation is the signature sign for illnesses at the Shao Yang stage.

To treat illnesses at the Shao Yang stage, use harmonization method.

If the Biao condition exists as well at the Shao Yang stage, use harmonization plus the elimination of the Biao, one possibility is to use Chai Hu Gui Zhi Tang.

If the Yang Ming Li full exists at the same time as Shao Yang Stage, then, harmonization plus elimination the inner full condition should be applied, Da Chai Hu Tang or Chai Hu Jia Man Xiao Tang should be considered.

If San Jiao is blocked with Shao Yang, and the body fluid cannot be distributed, then harmonization plus transform Qi and nourishes the body fluid, Chai Hu Gui Zhi Gan Jiang Tang should be considered.

If the patient receives the right treatment, Shao Yang illnesses could be cured.

If however, it is wrongly treated, such as body fluid is injured and dryness appears, often the illness may enter into Yang Ming stage.

If the Yang is injured and the Yin is in excess, the illness may enter into Tai Yin stage.

There is also the danger that Biao and Li are not treated in the right way, and the illness might eventually enter into Jue Yin stage.

As the saying goes: “Fullness at Shao Yang, deficiency at Jue Yin.”

The causes of Tai Yin illnesses are:

When the illness turns from Yang into Yin stage, the strength of the body to fight the illness is reduced, Spleen Yang is weak, and Cold and Dampness are the dominating signs. Fullness in the abdomen area, vomiting, no appetite and diarrhea are the common signs.

For Tai Yin illnesses, use warming method to eliminate Cold, strengthen the Spleen and dry the Dampness.

As the saying goes: “Fullness at Yang Ming, deficiency at Tai Yin.”

Shao Yin is a dangerous stage of illness development from the six stages model. When the illness is at the Shao Yin stage, the defense mechanism is weak, Heart and Kidney are involved, Yin, Yang, Qi and Blood are all deficient, sleepy with weak pulse.

The signature symptoms are Cold and deficient in the whole body, sleepy.

There are two categories of Shao Yin illnesses:

Cold type: Tonify and warm the Yang, based on Si Ni Tang and its variation.

Heat Type: Nourish the Yin and clear the Heat, based on Huang Lian Ai Jiao Tang and its variation.

If the patient does not receive the right treatment, Yin and Yang depletion might occur, which is a bad sign.

Shao Yin is an illness with upright Qi deficiency, avoids using sweating and purging downward methods, and if the patient could return to the Heath stage or not depending on if the Yang is rescued. Failure to do so might result in death.

As the saying goes: “Fullness at Tai Yang, deficiency at Shao Yin.”

Jue Yin is the last stage of the six stages. This is the final struggle between the Upright Qi and the pathogenic Qi. At this stage, Yin is depleted and Yang is weak, it is a dangerous stage if the patient does not recover. If there is a transition into the Yang stage, then it is a positive sign.

Illnesses at the other 5 stages, due to wrong / no / delayed treatment, could progress into the Jue Yin stage.

Direct attack of pathogenic Qi to the Jue Yin channels could happen, but seldom.

Liver channel, being part of the Jue Yin stage, when the Liver is out of balance, it could lead to disharmonies of Stomach and Spleen, Wood attacks Earth, vomiting and diarrhea belong to symptoms of Jue Yin.

At the Jue Yin stage, as the depletion of Yin and Yang lead to Cold and Heat symptoms, some scholars divide the illnesses at Jue Yin stage into Jue Yin Cold and Jue Yin Heat.

If there is upper Heat and lower Cold, then use clear upper and warm below.

It is to note that when the Yang is recovered too quickly, it could lead to soar throat, Blood in urine.

When both Yin and Yang are depleted, it is a dangerous sign.

All errors made due to using the content of this paper is on your own risk. The author suggests you learn from a master, a qualified teacher, a qualified practitioner.

It is important to know that learning Shang Han Lun is a long process, a must if you are practicing TCM, anywhere in the world. 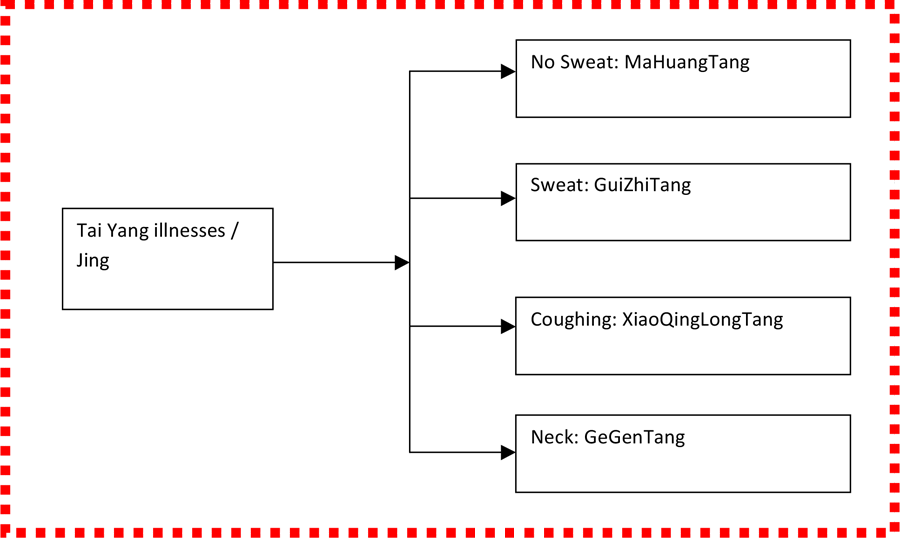 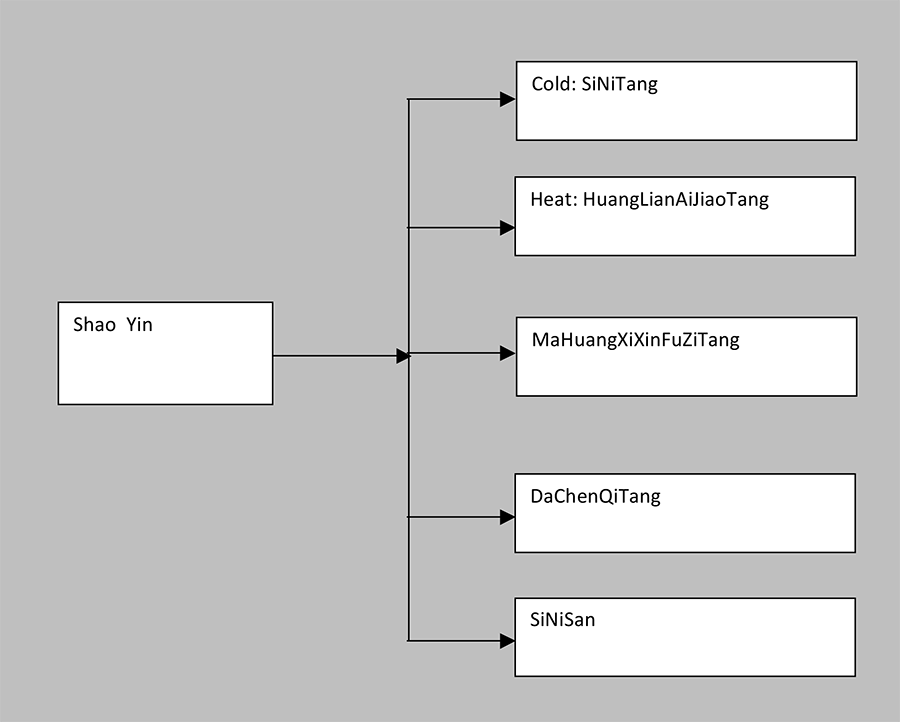 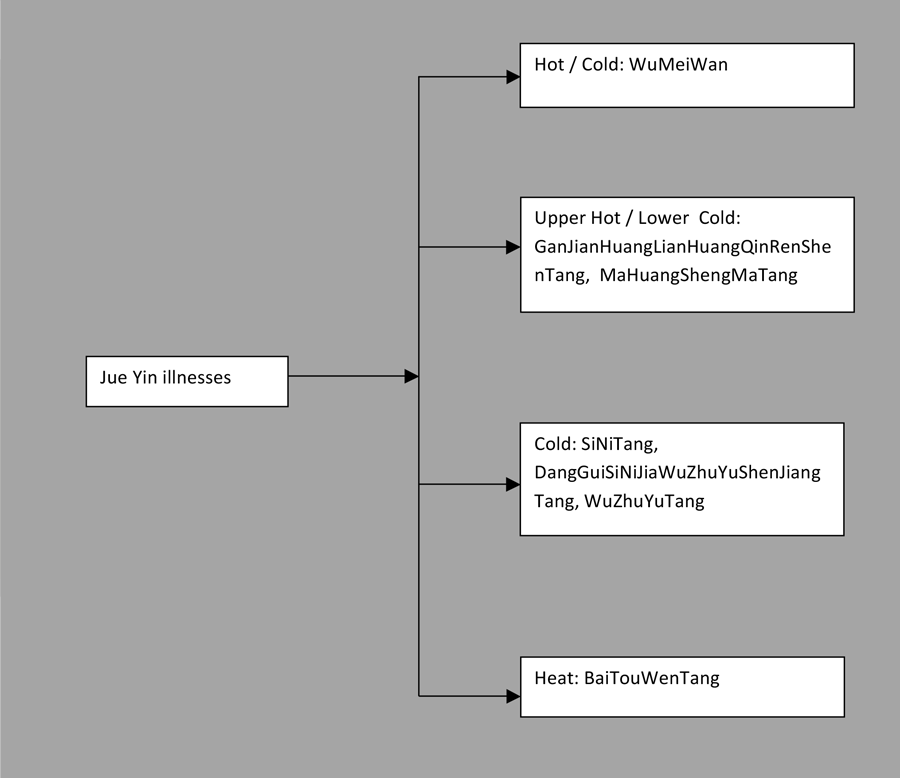 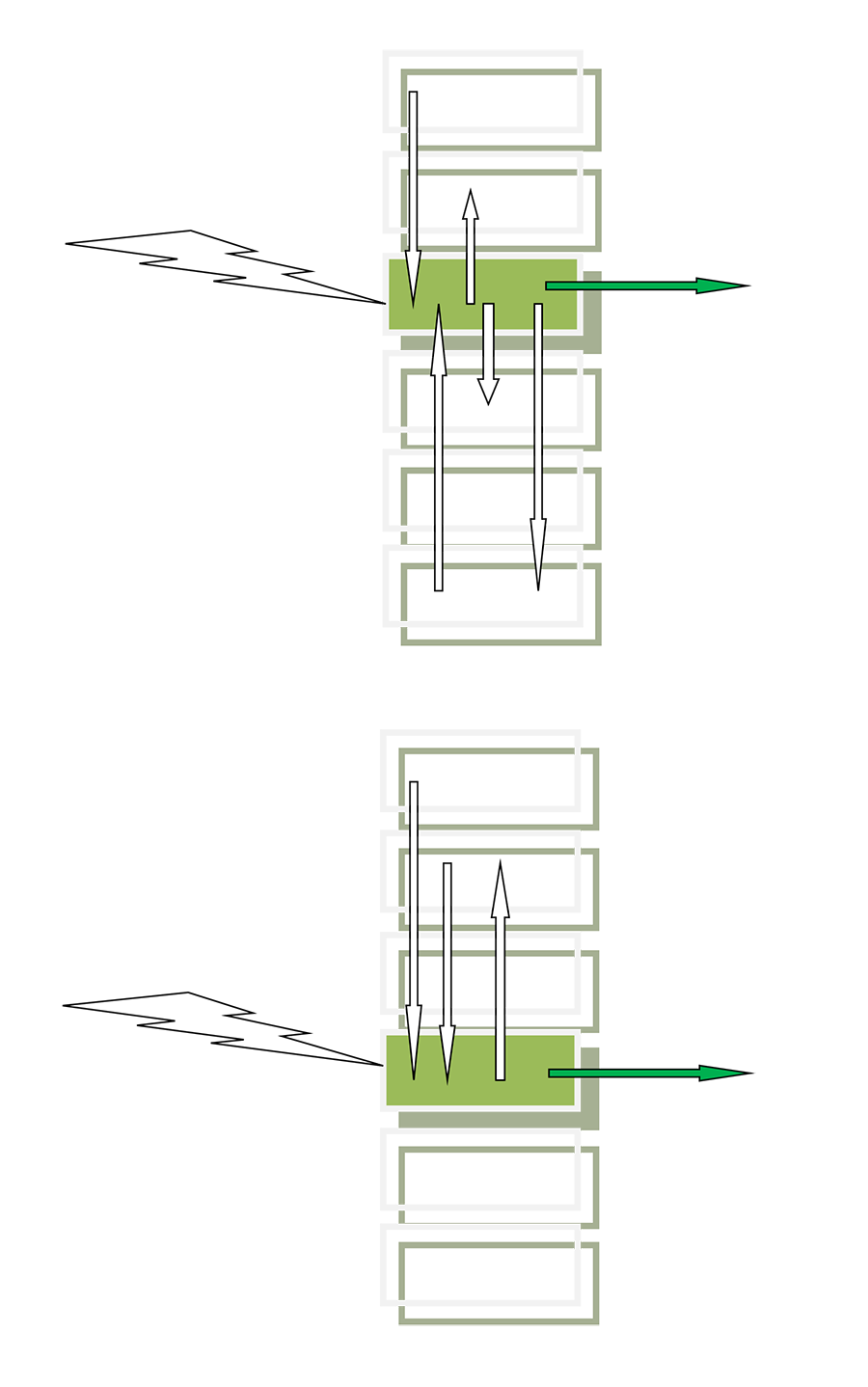